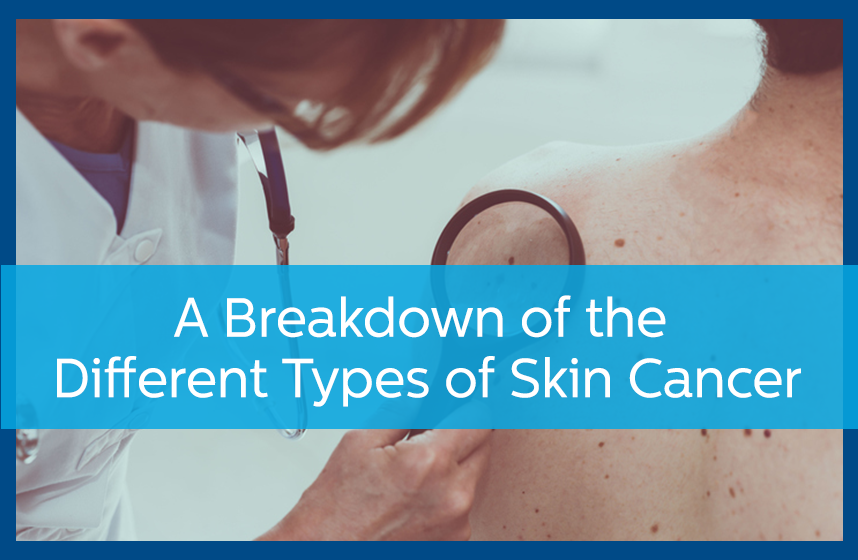 Approximately 9,500 people are diagnosed with skin cancer every day in the United States. That’s a total of over 3 million Americans a year affected. Even worse, studies are showing that as the years go by, skin cancer is becoming more and more common.

That’s why it’s vital to educate yourself about skin cancer. Keep reading below to learn about the three major types of skin cancer.

Basal cell cancers (“BCC”) are the most common type of skin cancer, with around eight out of 10 cases belonging to this group. Basal cells are from the lower part of the epidermis, the outermost layer of our skin. Like all skin cancer, sun exposure plays an important role in triggering cancer formation. Cancers are the result of damage to our genes, the DNA in our cells that controls cellular function. One of the most potent carcinogens we are all exposed to constantly is sunlight, specifically the invisible Ultraviolet portion of the sun’s spectrum. Ultraviolet (“UV”) light can directly damage our skin’s DNA and trigger cancer. As a result, BCC is most commonly seen in areas that have had extensive sun exposure, especially in the form of sunburns—face, scalp, neck, back, arms, and legs.

Basal cell cancer is derived from skin cells at the lowest level (the “base”) of the skin. Basal cell cancer is generally the least aggressive form of skin cancer. It virtually never metastasizes—spreads into distant areas of the body—which is generally what makes cancer lethal. But just because basal cell cancer does not metastasize does not mean it cannot be dangerous. These can still grow large and deep and cause extensive damage to surrounding tissue, including muscle and bone. Early treatment is the key to avoiding these complications.

Squamous cell cancer (“SCC) also derives from skin cells, but in this case, the cancer arises in the outer layer of the skin. Compared to basal cell cancer, squamous cell cancer is more correlated not with sunburns, but rather, the total number of hours spent in the sun. Thus, it is sometimes referred to as a “farmer’s skin cancer,” since it develops in people who work outside all the time. Again, face, scalp, arms, chest and upper back, and legs, especially in women, are the most common locations.

SCC is typically more aggressive than BCC. It can grow faster. In fact, some types of SCC (“KA-type”) can double in size in just weeks. Unlike BCC, in extreme cases, SCC can metastasize, if allowed to grow to a very large size. If it does, it becomes a dangerous internal cancer, requiring chemo- and radiation therapy, and in some cases, resulting in death. Again, early detection and treatment is the key to avoiding complications.

Melanoma is the least common kind of skin cancer but also the most dangerous. When you read tips about how to look out for cancerous moles, usually it is referring to this type of skin cancer as it occurs in the cells that produce pigment on our skin. Not surprisingly, since melanoma arises from melanocytes, the cells in the skin that produce melanin, the “tan” pigment, the cancers are often dramatically dark, the “black skin cancer.” These cancers also appear to be related to sun, mainly again in the form of sunburns, and are again found mostly in sun-exposed areas. However, it is important to realize that some melanomas can arise in areas that do not get sun exposure, including buttocks and even the soles of the feet.

Melanoma is the most dangerous out of all of the types of skin cancer. Unlike BCC and SCC, it grows rapidly, and has a very strong tendency to metastasize. As melanoma grows deeper under the skin, it becomes more prone to metastasize. Even an additional 1 mm of depth (less than 1/16th of an inch) can greatly increase the risk of metastasis. Once melanoma metastasizes, it becomes one of the most dangerous forms of internal cancer. Until a few years ago, metastatic melanoma was incurable and virtually always fatal. In the last few years, dramatic advances in cancer treatments that use the immune system to attack cancer, have allowed at least some melanoma patients to survive for extended times. Former President Jimmy Carter has been clinically in remission from a melanoma that metastasized to his brain since 2015, something that was unheard of just a few years ago.

Because of the pigmented nature of this cancer, any mole that is changing quickly, larger, or in particular, darker, should be checked. However, up to 50% of melanomas do not develop from a pre-existing mole so any new, changing, and darkly pigmented growth should be checked. Yet again, early detection and treatment is the key to avoiding serious complications.

Aside from the most common three types of skin cancer, there are also a handful of other skin cancers that less commonly happen. Here’s a brief description of those:

If you have any more questions or would like to discuss any type of skin cancer, click here to schedule an appointment with the expert dermatologists at Avail Dermatology.

Learn All About Rosacea
Scroll to top