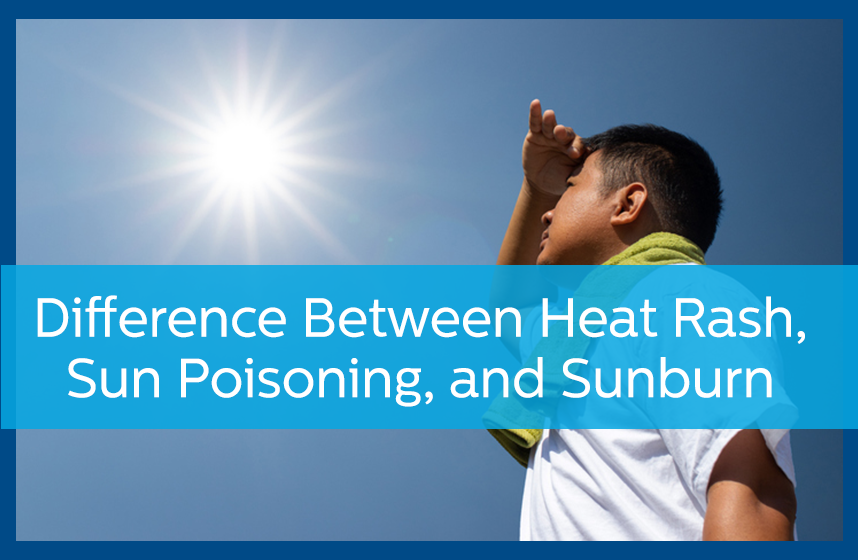 After spending a hot summer day outside, it’s common to come back inside and find a patch of red skin that was exposed to the sun. Or maybe a few days later a red and tender spot appears, even if it was covered while you were outside. While most people might assume the red spot is sunburn, there are actually multiple conditions it could be: a heat rash, sun poisoning, or a sunburn.

The names all sound the same, they look similar, and sometimes all three have the same symptoms. But all three require entirely different treatments.

The good news is that after reading this blog, you’ll be able to tell the difference between all three. To start off, we’re defining the less common of those three conditions.

What is a Heat Rash?

Heat rash is a common name for a rash that dermatologists call “miliaria.” While sunburns show up where the skin was exposed to the sun, heat rashes usually occur in places that are covered up from the sun. That’s because heat rashes are a result of temporary blockage of the sweat ducts. This might occur after being outside for a long period of time during hot temperatures. The heavy sweating that results can trigger miliaria, especially if the skin has been covered by clothing, especially tightly fitting clothing like stretchy workout clothes, or even in some cases, by very heavy occlusive lotions and sunscreens.

What is Sun Poisoning?

Just like a sunburn, sun poisoning occurs where the skin was exposed to the sun. However, this is a temporary allergic reaction to the sun, which dermatologists call Polymorphous Light Eruption. This typically develops in a distinctive way, as it is almost always seen after the first intense sun exposure following a period of time. Since the skin has not been “hardened” to sun by repeated exposure, it is much more prone to react. The classic scenario would be a mid-winter Caribbean cruise when the skin suddenly encounters tropical sun after months of winter darkness. The rash typically looks like very itchy “whelps,” raised bumps that look like hives or mosquito bumps.

How to Tell the Difference Between a Heat Rash, Sun Poisoning, or a Sunburn:

Sunburn is the easiest to recognize. It is strictly confined to sun-exposed skin, often with sharp cutoffs where clothing protected the skin. Unlike the other two rashes above, which itch, sunburns are painful, with a burning and tenderness of the skin, although later as the skin heals, itching can become prominent. When trying to distinguish a difference between the three, the most important things to consider are location and appearance.

Having a sunburn, heat rash, or sun poisoning is not a pleasant experience. That’s why it’s extremely important to protect yourself and your skin. Limit your time outdoors, wear the right kind of sunscreen, and make sure you aren’t wearing too restrictive clothing.

If you have any more questions about the difference between these three conditions, click here to make an appointment with Avail Dermatology’s talented staff of expert dermatologists.

How to Spruce up your Summertime Skincare Routine